The Principals of Science and Physics Behind HIFU 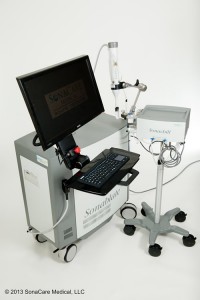 The figures below illustrate the Sonablate exclusive real-time 3-dimensional image and treatment capabilities during treatment. To the right of the images is the HIFU checklist originally developed by Dr. Suarez. It was designed to interface, correlate, and draw a parallel with the actual treatment originally develop a “HIFU procedure checklist”. It is meant to assure the best possible clinical outcomes. 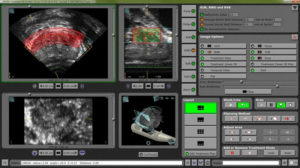 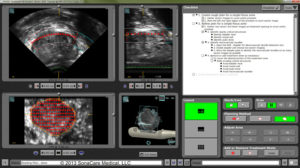 The illustrations below show how the transducer aims and focuses sound waves, and the effect in the body.

As an ablative therapy this is the most precise and accurate pinpoint placement of the focused beam to eliminate the cancer cells. 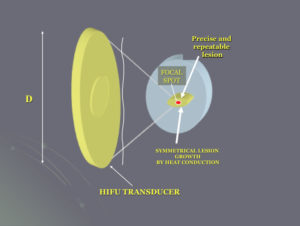 The diameter of the Transducer (D) will result in the size of the HIFU lesion (treatment zone). A lesion at the focal point (targeted site) will be precise, symmetrical, and identical to every other lesion. This creates a matrix of lesions, and successive lesions accumulate to treat the desired area, be it the entire prostate or a focal treatment.

Thereby there is less risk of injury to surrounding healthy tissue. 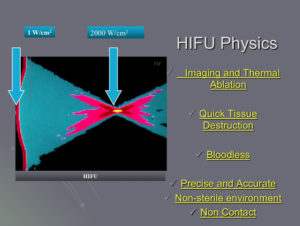 The emitted energy of HIFU precisely transfers the energy from 1 watt per cubic cm to 2000 watts per cubic cm. Note that there is no scatter of energy outside the targeted point. 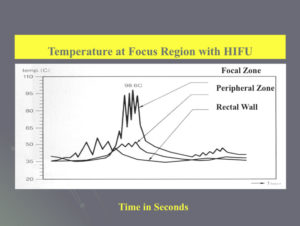 Lethally high temperatures occur at the focal point, which is what destroys cancer. Note that in the surrounding tissue, no significant temperature changes occur and do no permanent damage.

Why Choose The International HIFU Centers?

Most medical treatments, including HIFU, are performed in brief time frame. In fact, diagnosis, arriving at a treatment decision and post-treatment care consumes the majority of patient-doctor time and care. By offering PERSONALIZED- CONCIERGE medical care, our patients have 24/7 access to Dr. George Suarez, the founder of HIFU.